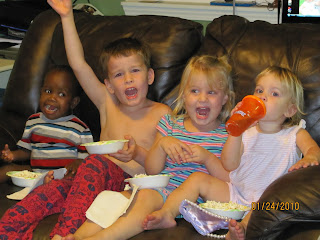 Wow! I can't believe that it was three weeks ago that Carrie and I were on planes both heading to Atlanta from opposite parts of the world. That's almost a month!! It definitely doesn't seem like we've been together a month...mostly due to the 2 week time warp I experienced upon our return as I lost myself in the library in ways that reminded me of medical school! I was definitely thankful that my research year allowed me to study like this, but even more thankful when my test was over last Sat afternoon! I'll get the results early in March and am just trying to rest in the peace of knowing that I gave it my best and stayed focused through all the changes in our house. Yet again, thank you Carrie!! 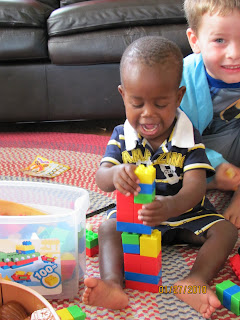 So, this week has been SO enjoyable getting to play with the kids. Definitely weird all of a sudden having a three year old (that's smaller than our baby Gracen) and four year old that don't have any of the same expectations as their ages. They are doing so well and learning so much, daddy just has to remember to be patient and remind himself to help them learn not be frustrated! 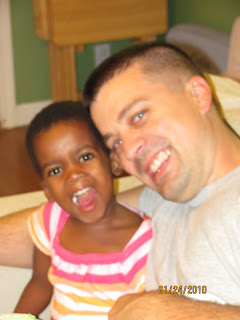 They are both so precious though and it's been wonderful to see their personalities and to truly experience them. Jackson is the sweetest thing ever and I just want him to be the size of the things he wants to do!! I can't get over how tiny he is, but he's going to catch up with time! Please! Carrie had told me how much I was going to love Jackson because he's such a snuggler, but that role has undoubtedly belonged to Mykah. You can tell she really needed a daddy and she finds so much comfort in my arms and reassurance. She's definitely got some spunk in her and I now somehow have acquired three beautiful girls with amazing wills that mirror and will one day challenge even their mother's! That's saying a LOT! I can wait till the teenage years and beyond for sure! We just pray those wills are put to great works for the Lord!! 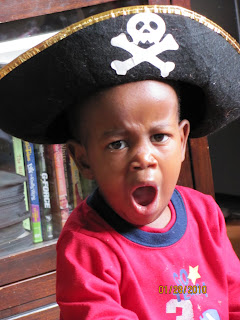 Carrie mentioned the other day how "quiet" it was when I had a Jackson and Colin at the store and she "only" had three of them! Wasn't too far back that we thought three was wild! Getting anything done during the day is nearly impossible, so quite the sigh once they finally go to bed and we can rest...I mean accomplish things. Going to bed had been going well until Gracen learned the other day how to consistently get out of her crib at her will and today even learned how to open the door on her own as we found her in the kitchen when she was supposed to be napping!! Twice a minute for about 15 min of repeated trips into the room to put her back in the crib tonight before I finally laid down on the floor next to her for a 1/2hr before I low-crawled out of the room Ranger-style. You love them learning until they learn what they want, not what you want them to! :)

Also, please pray for our friends Melanie and Jeremy. Melanie arrived a week before Carrie in Nov and is still there with no signs of the end in site! We need God to move for them and reunite her, their three adopted kids and their 15mth old girl with their daddy and brother and sister back home in OK!!!!!!
Posted by Carrie Elliott at 10:25 PM 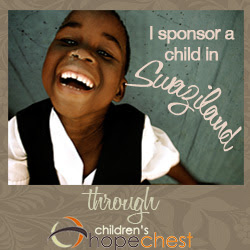